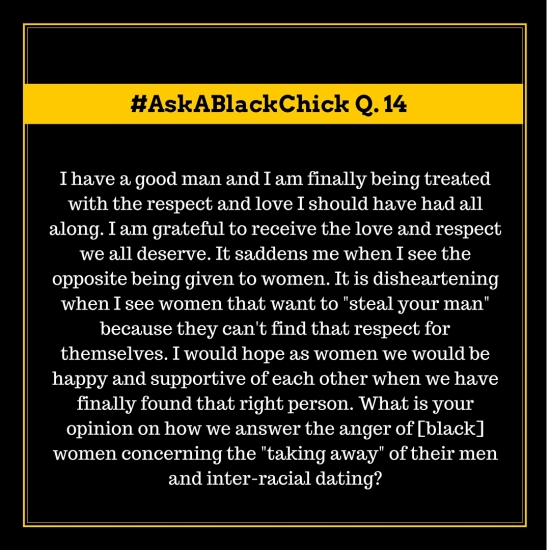 The full question was quite lengthy but gives great background and context. Here it is:

I have had many crushes on black, white, latino,…..young men in high school. I have dated black men, white men and Latino men as an adult. I did marry a white men. there was no reason other than they are persons with whom I feel in love with. I recently met a wonderful black man that has been everything I could imagine in a good man. We have fallen in love and moved in together.

I have seen white women verbally attacked by black women because they date black men. I have heard it stated that we, white women, are taking their good black men. Yes, I am ready and willing to defend myself and my life partner in public with anyone around. I have done so already. Some may say, “so what.” This is not something that is so easily accepted growing up where I did. I, however, have raised my children totally different than how I was raised and we have a great respect for all human beings regardless of the color of their skin or religion. We, my daughters and I have a love for the “Human Race” regardless.

What my question is, is there anything specific I could say in response to a black woman’s confrontation of anger for dating a black man?

I don’t care what they think as I don’t care what any white person would think. But, I do have respect for all people. I feel as though they deserve to be responded to in a respectful, intelligent manner, while letting them know in no uncertain terms that not they, nor anyone else will ever deter me from being with and totally protective of, my partner and our relationship.

I have a good man and I am finally being treated with the respect and love I should have had all along. I am grateful to receive the love and respect we all deserve. It saddens me when I see the opposite being given to women. It is disheartening when I see women that want to “steal your man” because they can’t find that respect for themselves. I would hope as women we would be happy and supportive of each other when we have finally found that right person. What is your opinion on how we answer the anger of these women concerning the “taking away” of their men and inter-racial dating?

This is tough because there are two answers; the obvious one, and the compassionate one.

The obvious answer is, you don’t owe anyone any explanation. In a world where black people aren’t polarized away from everyone else, I would tell you to ignore it and respectfully refuse to engage. This is your right, even in the imperfect world we live in, however here is a compassionate answer, because the nuances of race in America call for it.

The fact is, there was a war waged on black men, stripping them from the homes of there families due to mass incarceration. If you add war, the increasing number of homosexual men, and men who are increasingly more verbally and physically abusive to women, the numbers may seem bleak. Then, you add in the fact that black women are the least desires by men of all races (or so the polls say), and you have a perfect storm of insecurity aggression. Simply put, we are massively afraid to lose the only men who could properly love us.

Simply put, we are massively afraid to lose the only men who could properly love us

On many occasions, black men who date white women fetishized you. They hate their own and they make it known. This may not be the case with your boyfriend/husband, but it’s often reflected. I think your relationship is just a trigger to deep rooted pain. It’s not your fault, but it’s where a compassionate interaction would do some good.

You could say, “Hey, I understand why you are upset, and under any other circumstances, I wouldn’t dare honor your attack with an answer. However, out of pure love, I will say this, I do not fetishize him, I understand the plight of my husband and the community he belongs to and I consider myself an ally. I love him unconditionally and fully, and I won’t apologize for not being black. I do hear your frustrations and you need to know that it’s not about me in particular, but if you need a sounding board, I can do that.”

Now, if those words aren’t sincere or authentic to you, then do not say them, but that’s what we need to hear to feel like you aren’t just another colonialist, colonizing our family structure.

Now, if those words aren’t sincere or authentic to you, then do not say them, but that’s what we need to hear to feel like you aren’t just another colonialist, colonizing our family structure.

See this is a tough question to answer, I must admit that I do not support interracial relationships at all based on politics, perception and preference. But at the same time I am completely against attacking White women for “stealing our men” or whatever rubbish.

I do not support interracial relationships at all based on politics, perception and preference. But at the same time I am completely against attacking White women for “stealing our men” or whatever rubbish.

I am never shy speaking about interracial relationships in the wider context, that’s one thing. But actually actively going after people in real life is a whole other story. I’ve always thought that all that energy could be better put towards something else.

Honestly there is nothing you can say to the type of Black women who come at you, they cannot be reasoned with, they can be conversed with. I’d say don’t entertain them and carry on with your life because no matter how strongly they feel about your relationship and what it represents to them no one has business being the third party in it.

5 thoughts on “#AskABlackChick: As A White Woman Dating A Black Man, How Do I Handle the “Stealing Our Men” Stigma”