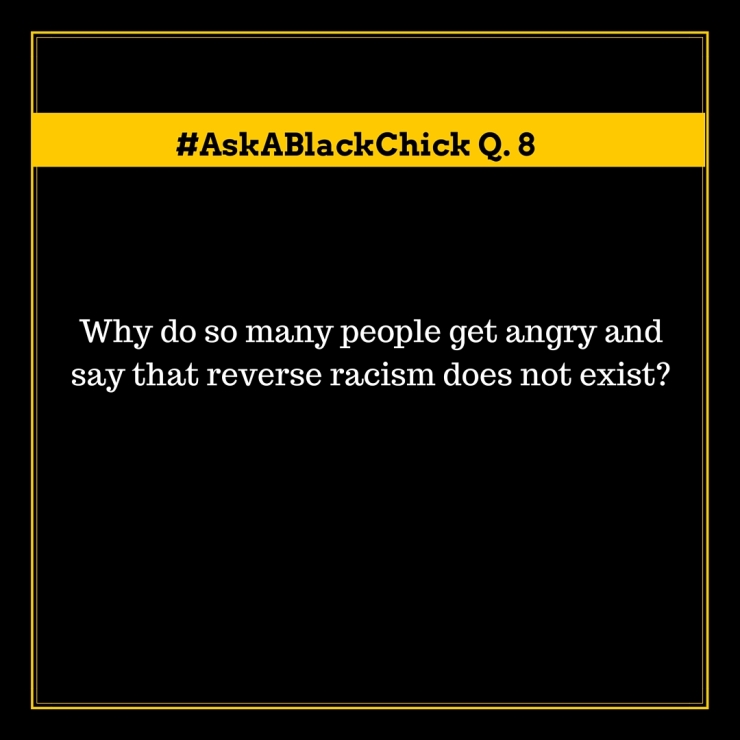 I think reverse racism and the fact that is actually a made up thing is hard for people to understand. I mean, no one brings up reverse racism on it’s own. It is only used as a defense for actual racism.

“Reverse Racism” is a term that has been thrown around a lot lately due to the current social climate. It makes many people of color (and not) angry because the deep rooted racism that is experienced in America is structural, not personal. There are years of educational, financial and social disadvantages that have been the result of the legislation and exclusion created by white people that ran America for centuries. Of course, there is anger there….But, just because a person of color is angry or frustrated with the way they have been treated by white people does not make them racist.

Just because a person of color is angry or frustrated with the way they have been treated by white people does not make them racist.

Behaving prejudicially is NOT the same thing as racism.

“Reverse racism” cannot exist simply because racial prejudice directed at white people doesn’t have the same weight of institutional oppression propping it up and perpetuating it. People of color can be prejudice, but we do not have the power (at this time) to exclude white people from mortgages, higher education or powerful positions in companies in the manner that we have been excluded.

Furthermore, just because people of color have created spaces for themselves to excel (i.e. Historically Black Colleges and Universities, NAACP) also does not make them racist. We have been excluded from so many institutions and organizations in the past and still largely today, that we had to create somewhere for us to lift each other up.

But the beauty of this wonderful community is that we represent the beauty in being black chicks. The beauty that allows us to carry on and accept anger and hate and turn it into love and style. And to share it.

The answer in this question is that which enables me to follow suite and get in #formation.

Racism is a systematic, institutionalized form of oppression that has enslaved the minds and actions of a particular targeted group. Now no, I realize this is not the Webster’s dictionary definition. It’s mine.

Racism is a systematic, institutionalized form of oppression that has enslaved the minds and actions of a particular targeted group.

When people talk about racism we are talking about laws and policies put into place that effects (and sometimes controls) the actions and thoughts of a particular group.

The actions may result in lifetime prison sentences, self-hate, countless mindless murders of numbers of young innocent children, not wanting children for fear of your government officials killing them, etc.

But I have yet to see a form of law or policy that results in white people feeling these things. Yes, they may experience them. Yes, the may at times experience (discrimination), but it is not reverse or any other direction form, shape of that which is defined and experienced as racism.

TWO
The words speak loud and clear. Calling reverse racism REVERSE racism tells you all you need to know about the nature of racism and who the racist is supposed to be.

Calling reverse racism REVERSE racism tells you all you need to know about the nature of racism.

THREE
Do you know what an ISM is? Now refer back to one.

People get mad when reverse racism is made out to be a real thing because it’s not. It’s yet another product of White tears and it’s not cute. It’s along the lines of “what about white history month?” and “I didn’t own any slaves“.

Join the community and have your voice heard here. Or ask an anonymous question here.