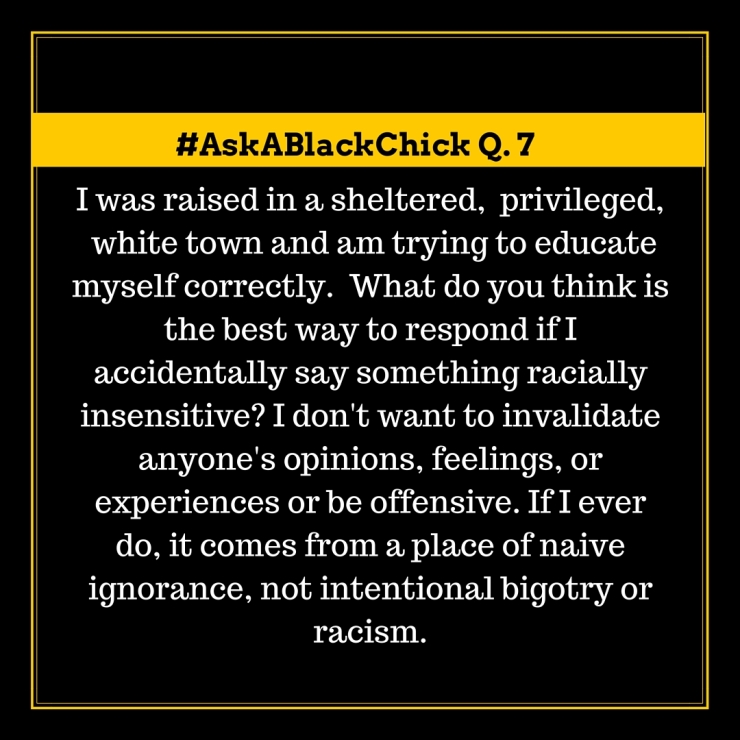 Sometimes, without meaning to, people not of color can make comments that are racially insensitive and be labeled as a racist. What do you do if that’s you? How do you not take the offense, in turn making the situation that much worse?

I respect you and others that are willing to understand what social issues are really taking place, for at least being sensitive to other points of view as well as those who have had differing experiences than yours. I think part of the problem with some people (of any race or ethnicity) is that very few want to admit their faults.

If you genuinely did not know you were being offensive try to take the time to ask how and why the individual may be offended.

I would say the best thing to do if you find yourself in a situation in which you may have offended someone of a different race, ethnicity or background is to be honest. If you genuinely did not know you were being offensive try to take the time to ask how and why the individual may be offended. Then take the time to explain why you may have said or done something they deemed offensive.

Use all situations, positive and negative as a learning experience.

Use all situations, positive and negative as a learning experience. As long as you are making the effort to understand those with experiences different than yours, you are heading down the right path. This takes time and patience but the end result is that more enlightened and educated people walk away from the situation. Keeping an open mind is key!

To begin with, it’s a good thing that you recognize your own privilege because of course everything begins with recognition. Talking about educating yourself properly, I don’t know what kind of education you’re seeking but be careful with that, because you could easily be mislead.

One of the main things to not do is try too hard to not say the right thing, because that’s when you end up saying the wrong things. We don’t appreciate it when you tip toe around us like we’re motion sensitive bombs. And if you do say something that offends or comes off as ignorant, just be honest and explain why. Anyone who isn’t a complete idiot will be able to tell where you’re really coming from.

If you do say something that offends or comes off as ignorant, just be honest and explain why.

I know how I react to those three things and it’s not pretty. As long as you’re coming from a good place you’ll be fine.

I would think the best way to respond to unintentional micro-aggression that may make you seem ignorant and insensitive is to acknowledge it and maybe offer an apology.
Most people are ignorant of other cultures and struggles that differ from their own. Possible ways to help avoid those moments that make you seem desensitized toward others would be to consider how you would want to be approached about your culture and struggles of your people. There is nothing wrong with caring or inquiring, or a healthy debate. It is the delivery that makes the difference. Think to yourself:
Am I posing this question to concur with my current thoughts about this particular group, or am I truly curious and therefore going to ask the question openly without a predicative clause at the beginning of my question or statement?
Once you create a conscious pattern of asking openly rather than posing a question of offering an opinion to validate a stereotype, it will expand your perspective and lessen these uncomfortable situations.

Understand, too, that your opinion is still valid. Disagreeing on a topic that may lead to race does not make your perspective invalid. It is your truth and the only truth you know until you learn differently.

The worst thing you can do is neglect the energy of how your nativity made someone feel and pretend you are unaware.

Again, it is truly about delivery and acknowledging if there was any moment of insensitivity; owning it, apologizing, learning from it and moving forward. The worst thing you can do is neglect the energy of how your nativity made someone feel and pretend you are unaware.

I think one the best approaches to take when offending anyone is to apologize and getting to know them. Saying something inappropriate will be unavoidable; it happens to all us. The important thing is that as you spend more time with the specific racial group you’re referring to, you’ll naturally understand their culture more and will learn their standards of appropriate and inappropriate concepts.

Saying something inappropriate will be unavoidable; it happens to all us.

Reading about different cultures (through the web, library and other resources) can also expand your knowledge of such cultures. Research about what’s taboo and offensive as much as what’s acceptable and honorable.

Join the community and have your voice heard here. Or ask an anonymous question here.